Inaugurated in 1984 by His Royal Highness, Prince Charles of Wales, the National Parliament is the most iconic building of Port Moresby and the symbol of Papua New Guinea. One of the most stunning architure piece of the Pacific nations.

« The National Parliament is far more than just a building or even just a parliament. It is, for Papua New Guinea, a symbol of political independence. It is a cathedrale dedicated to the people and to democraty. » (The Honorable Timothy Bonga, Speaker of the House, 1982 – 1985)

The National Parliament Haus is an outstanding ode to the unrivalled heritage of Papua New Guinea’s hundreds of tribes, a symbol of its enthralling customs celebrated since generations. The design « in the manner of the Haus Man (Men’s House) in a village society where all decison-making for the welfare of the village was made »is of the Australian architect Cecil Hogan. Although the building gives the appearance of a single structure, it’s a complexe of three units linked together with a large roof and covered walkways. The main building is built in Haus Tambaran style (“house of spirits” in Tok Pisin) with its A-frame and long design, while the cafeteria’s structure follows the Highlands look. With a superb facade, rich in mosaics depicting Papua New Guinean motifs, the complex is one of the most remarkable monuments in the city. Inspired by the traditional sacred houses in the Maprik region of East Sepik province, the rocket-shaped roof pointing to the sky, gives the building his unique and futuristic look.

The interior decoration and the tile mural on the facade displays the work of some of the best known PNG modern artists such as Akis, Jakupa, Mathias Kauage, Gikmai Kundu, Cecil King Wungi and Benni More. The nineteen metres high mosaic above the entrance is dominated by the sun giving light to the whole scene of symbolic images representing the spectrurm of life in Papua New Guinea. Two warriors, a man and a woman, the sea, a lake, a river, a village, gardens with crops, pigs, birds, turtles, fishes, cassowaries and butteflies represent a fertile land where people live in peace and harmony. As a symbol of modernity, a smiling helicopter is flying over the venue illuminated by this sentence : « Parliament may make laws having effect within and without the country for the peace, order and good government of Papua New Guinea and the welfare of the people. » 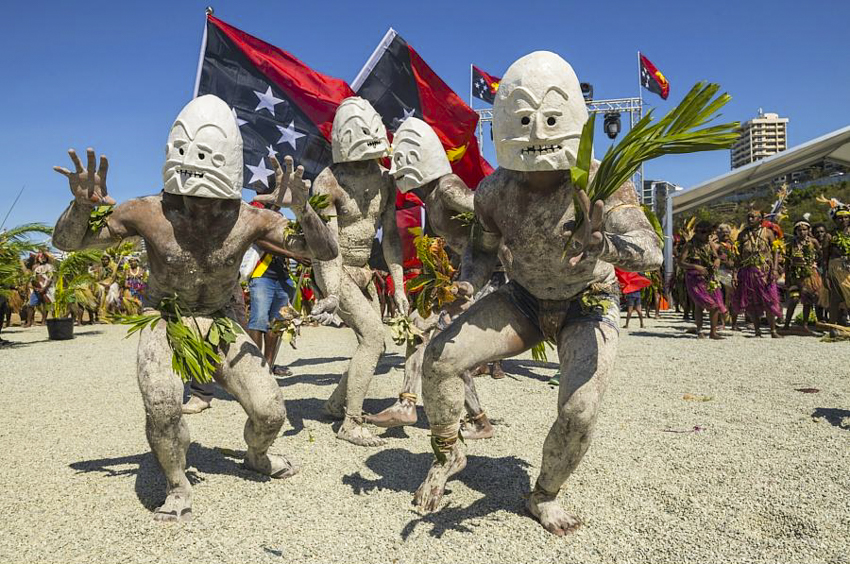